FLUXUS AND THE ARCHIVE #3: TWO DIRECTIONS

And here is the third part and last part of my trilogy on Fluxus and the archive. In part one, I introduced two forms of being in the world, the ecological and the economical. In part two, I applied these notions to two works of art, Mieko Shiomi’s Spatial Poem No. 1, subtitled Word Event, and George Brecht’s Word Event and suggested that even though one of the works appears archival and the other anti-archival, they both carry elements of the archive, if displaced. This part specifies my claim and translates it in terms of directionality.
In an article about Gerhard Richter’ Atlas (in October, of course), Benjamin Buchloh experimented with the idea of an “a-nomic” archive, an archive without laws. He equated the word a-nomic with “heterogeneity, random order and arbitrary juxtapositions” and described it as governed by the “principle of random accumulation”. All his terms apply to the two Word Events I describe in my previous blog entry. Brecht’s Word Event collects all sorts of materials, from thoughts to photographs to signs. Shiomi’s Word Event juxtaposes words on the basis of an ordering principle that is completely extraneous to the words themselves. Both works accumulate and juxtapose material in a way that appears lawless. But Buchloh also speaks of “the archival organisation of materials according to the principles of an as yet unidentifiable discipline”. He wants appearances of the archive in art to be radically different from existing real world archives; and here, I think, my two Word Events behave differently from the archives Buchloh describes. They are hetero-nomic rather than a-nomic; they formulate and obey different laws, but evoke existing archives nevertheless.
According to Derrida, the archive domesticates: it locks events inside documents and collects those documents in one place. That place is the centre of two movements, one of them outwards, one of them inwards. The element of the archive that Derrida associates with the word “commencement”, beginning, claims that society begins with the archive; things are pulled into the archive from a projected originary point. The element he associates with the word “commandment”, law, on the other hand, projects outwards; it casts the net of archival law over everything out there. The archive is both a long way away, at an imaginary beginning, and everywhere around us; it is active both as an ideal and as its countless imperfect embodiments. These elements are also present in the two Word Events. Brecht’s Word Event has the word “EXIT” as its starting point, but because it only acquires an existence when people undertake action in relation to it, be it thought action or actual physical action, the work as such is always beyond reach. It reaches out to all real and imagined exits but is itself forever impossible to grasp. Shiomi’s Word Event first spread itself out to all corners of the world and then returned in the shape of documentary evidence. Unlike Brecht’s work it is tangible and finite, but a change occurs at the far point of the work’s boomerang movement that carries it from the world of possibilities and realisations to the world of impossibilities and sensations.
What this amounts to, is that although this type of work generates ecological knowledge, it shares certain features with the archive as well. I do not mean material features; even Shiomi’s Spatial Poem No. 1, that explicitly calls for the documentation of an event, is not an archival work of art in the sense in which Buchloh understands it, as the archival organisation of materials according to principles that are valid for a discipline outside the art world. What it does instead is explore the way the archive files, actively; not the materials but the act it performs; not the archive and the document, but the two directions it moves in, the outwards of commandment and the inwards of commencement. Works such as the ones I have discussed here understand the archive as performance and performance as archival. What we tend to notice about the archive is its solidity, its tangibility, but these works destabilise it and reveal its lack of balance by allowing you to experience what it cannot do, and therewith what it does, instead of what is and what it is not. They are both ecological and economical. They point the mind – the mind of the curator as well – in the direction of the archive because they make use of the mechanics of the archive even as they generate experiential knowledge. Their heteronomical character is indeed heterotopian, but not in the sense in which Foucault understands the term. It is not the evocation of different times and places that makes them heterotopian, but the way in which they activate the here and the now and the self of the spectator.
Indsendt af Peter van der Meijden kl. 05.01 Ingen kommentarer: 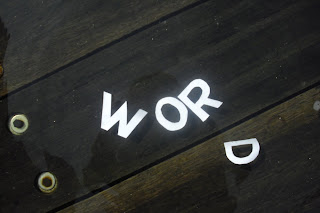 FLUXUS AND THE ARCHIVE #1: TWO HOUSES

﻿﻿﻿﻿
This blog entry, and the two that follow it, are an adapted version of the paper I read at the 17th annual conference of the association Performance Studies international (PSi) in Utrecht, on 25-29 May 2011. In its turn, my paper is an altered and expanded version of a tiny snippet of a longer text on Fluxus and its relation with the archive. The choice of snippet was determined by the theme of the conference, “Technology, Memory, Experience”. It is about the experiential nature of Fluxus works, the way they activate and affect our memories and their relationship with our sanctioned ways of remembering as embodied by the archive. The paper consisted of three sections, entitled “Two Houses”, “Two Word Events” and “Two Directions”. Today’s blog entry is a modified version of the first part.
There are as many accounts of Fluxus as there are Fluxus scholars, but one thing most of them seem to agree upon is the idea that Fluxus works offer nothing but themselves. I will here refer to only one of them, Hannah Higgins, and the way she phrased that particular idea. In her book Fluxus Experience (University of California Press, 2002), she writes that Fluxus works offer “an ecological form of knowledge that (...) allows us to understand ‘our place in the world’” (p. 34). I am especially interested in the word “ecological” here. Ecological knowledge, and another term Higgins uses, “primary experience”, refer to a direct bodily experience that tells you something about who you are in relation to the objects you handle and the temporal and spatial situation you find yourself in. Such knowledge is always personal. You can compare it with others, but others can never have the exact same experience. Applied to art, this means that everyone creates his or her own work of art. Such a work is always with you; it is never elsewhere; and that, of course, is the diametrical opposite of the archive as we know it, because one of the characteristics of the archive is that it accumulates things from elsewhere and from other times. In fact, it is exactly this aspect of the archive that prompted the philosopher Michel Foucault to characterise it as a “un espace autre”, a “different space”, a heterotopia, “a kind of effectively enacted utopia in which the real sites, all the other real sites that can be found within the culture, are simultaneously represented, contested and inverted” (in “Of Other Spaces”, 1967/1984).

I will return to this quote in section 3 of this text, but actually I am not really concerned with Foucault here. What I want to do here, is contrast Higgins’ understanding of the word “ecological” with the word “economical” as Jacques Derrida uses it in his theory of the archive as formulated in the essay “Archive Fever, a Freudian Impression” (Diacritics, vol. 25, no. 2, Summer 1995, pp. 9-63. Derrida starts his account of the archive with the etymology of the word. He points out that it has a double root, both derived from the Greek word “arkhē”: commencement and commandment, beginning and law. The word is connected with the arkheion, the place where the records were kept, and the arkhons, the people who did the keeping. The archive, Derrida writes, “shelters” and “domesticates” its contents; it “places them under house arrest” (p. 10). That is why he speaks of an “eco-nomy” (p. 12), from the Greek words “oikos”, house, and “nomos”, law. He also speaks of the topo-nomology of the archive (p. 10), his way of saying that the archive is twice determined, by and as location and by and as law. The word “ecology”, by contrast, derives from the Greek word “oikos”, house, and “logia”, study of. The study of the house and the law of the house are apparently mutually exclusive.

When explaining his use of the word “economical”, Derrida writes about the archive that “it keeps, it puts in reserve, it saves, but in an unnatural fashion, that is to say in making the law (...) or in making people respect the law” (p. 12). What it collects is signs; written proof, but also, in Derrida’s words “that which it presupposes”. The archive “coordinates a single corpus, in a system or a synchrony in which all the elements articulate the unity of an ideal configuration”. Proof presupposes a distance between sign and signifier and that distance, in turn, presupposes an ideal that all signs point towards but give an imperfect rendition of. Hannah Higgins, by contrast, claims that Fluxus works never signify anything. They are carriers of primary, ecological knowledge, and any meaning that is found in them is secondary knowledge. An archive collects signs, a Fluxus work disperses primary knowledge. An archive imposes a law upon others and it regiments experience, a Fluxus work leaves you free to experience things for yourself and takes pride in the endless variety this produces. An archive collects things in a particular place – Derrida means the document and the archive at the same time –, a Fluxus work emanates from one place and wanders off from there with all the people it connects with. The two houses, the house of the law and the house of study, could not be more different.

And yet Fluxus exhibitions nearly always take the shape of archives. How come?