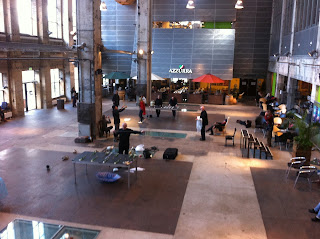 Boris Nieslony is kicking a stone around, Jürgen Fritz is walking around with a balaclava on his head, dragging a piece of piping and Elvira Santamaria Torres is striking matches. Lee Wen is sitting on a chair, wearing a sleeping mask, Alastair MacLennan is carrying a plastic sheet around and Roi Vaara is folding and unfolding a folding ruler. Myriam Laplante is dressed as Santa Claus, Elvira Santamaria Torres is filling plastic bags with helium and Jürgen Fritz is hammering two long beams together by means of shorter ones. What does it all mean?

All of the actions took place during a six-hour performance by Black Market International, the international performance collective that visited Aalborg last weekend. As I wrote in my last blog entry - see here - I was there to engage the audience in conversation about the event. Since the performance took place in the entrance hall of a community centre containing a theatre, a cinema, a fitness centre, a pizzeria and lots more, this was not an easy task: a large percentage of the spectators just happened to be passing. The taciturn nature of the local population didn’t help either: “So what do you think of the performance?”  [a couple of minutes’ silence] “I don’t know.” “But what do you think they’re doing?” [another couple of minutes’ silence] “It’s a bit weird.”  End of conversation.

But then, this was a very special kind of performance. Black Market International (BMI) perform together, but without agreeing on roles or a plot beforehand. All you see is a number of performance artists, all of them with their own style and background, who meet up, who start out by doing their own thing but who sometimes come together, drift apart, come together again, et cetera. Because that was what’s happening. In amidst all of the chaos the performance area suddenly divided itself into two, one area where people did things and one where people built things. Or suddenly two of the performers were doing something with numbers. Or four of them were slowly moving along in a kind of conga line, swaying from side to side.

In this kind of performance – and there isn't really anyone else who does it quite like this – what you have to look for is not a story or a structure, but the dynamics, the ebb and flow of the action. The famous Untitled Event at Black Mountain College in 1952 springs to mind. Here, Cage himself read a text on music and Zen, Robert Rauschenberg played with a gramophone, David Tudor played a prepared piano, Charles Olson and Mary Richards read poetry, Merce Cunningham and other dancers moved through the room – all independent actions, performed in such a way that the audience could never take it all in. However, the event was organized by Cage by means of time slots allotted to the players and the seats were arranged to ensure that every spectator got a different view (see here). There was no story, but there was a scheme. The BMI performance, on the other hand, was entirely unplanned and unorchestrated. All there was, was the action unfolding in time.

BMI serves performance art the way the textbooks want it to be. This is really performance taking place in its own time, performance that it is impossible to document, performance that takes place in the spectator’s here and now. What it certainly is not, is just a bunch of people fooling around. While it may strike the casual passer-by as strange, perhaps even alien, no-one was tempted to see it as pure nonsense.  It was obvious to everyone that the actions were performed with sincerity and with a lot of experience to back it up.  It is not hard to see why BMI has continued existing for 30 years and why the individual artists take part in it for such a long time: this exercise in leaving all your plans and routines behind leads to the purest, barest performance art imaginable. Whether you like it or not, this is a fascinating experience.

Last weekend, I manned the “samtalekøkken” (“conversation kitchen”) during the Kulstof 15 festival in Aalborg, Denmark. My job was to engage visitors in conversation about the performances they had just seen. This gave me a lot of time to talk about them and to reflect on them. Here are some of my thoughts.

On day one, I watched Elvira Santamaria Torres (Mexico) perform her Shadow Self-Portrait. Torres started by bending over, shaking her hair out and sticking her hand out through it in gestures indicating basic emotions, from supplication to anger. Then she started striking matches, faster and faster, counting each one of them like the years of a life. Finally, she blackened a sheet of glass that she held up in front of her face with soot and traced a stylized face in it with her finger. Was this the shadow self-portrait from the title? Or were the other scenes shadow self-portaits as well?

If Torres’s performance demanded a willingness on the part of the audience to wait for the imagery to unfold, Myriam Laplante (Canada/Italy) captured the viewer’s attention straight away. Her performance The Phenomenology of Doubt started with her writing words on a black wall with a horribly squeaky piece of chalk attached to a piece of string on a nail. “Doubt”, she wrote along the perimeter of an imaginary circle, and “universe”, and “art”. She filled the space in between with other words to create a circular sentence: “doubt in the post-material universe of contemporary performance art through the study of the phenomenology of…” and so on and so on. Then she performed two conjuring tricks: first she put a vase of flowers on her head and danced, finally leaving the vase hanging in the air, and then she lay down on thin air and floated out of the room. Except that she didn’t: you could see the figure in black that held the vase, just as you could see the black table on wheels that she lay on during her exit. It was all a trick. Doubt.

Both performances make demands to the viewer. The first one expects him/her to stay and piece the scenes together, the second one expects him/her to go over the action once again in his/her head in order to work out how the notions of “doubt”, “the universe” and “art” fit in. Intense viewing combined with reflection along the way vs. relaxed viewing followed by reflection. Retroactive reflection in both cases: reconstructing the performance again and again in your head as new layers are added to it, reconstructing it afterwards on the basis of the words supplied by it after the performance has lifted its spell. If performance really is characterized by the fact that it only happens once, like performance theorists used to claim, it is the spectator’s time, not the run-time of the actual performance. If it only happens once, it happens in a strange, broken kind of time that encompasses memory and reflection as much as it does actual experience.


Did the audience comment on this? Not really. Some merely answered "I don't know" when I asked them what they thought of the performances. Some of the less taciturn ones confessed to being frustrated about the lack of narrative in the performances. But among the most talkative ones I did notice a tendency to want to confirm their readings with the artist or, if s/he didn't happen to be around, with me. It may for a long time have been an item of faith among performance theorists that a performance happens in its own time, but it was equally common to point out that performance happens in the viewer's space. I am tempted to conclude that that space, just like performance time, is strange and broken. That these viewers wanted to ask the artist means that they were aware of the latter's presence as a human being, but it also means that they saw him/her as the key to the work in the Modernist sense. A direct line between the artist and the viewer, yes, but one with a big kink in the middle.