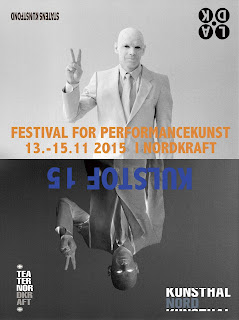 This year, the performance collective Black Market International celebrates its 30th anniversary. It does so, amongst other places, at the Kulstof 15 festival in Aalborg, Denmark.

The group's aim is not to create collective performances that can be understood as a single coherent whole, but to achieve a kind of simultaneity in which each participant provides input that will somehow enter into the whole, even if it is not explicitly picked up by the others. Like any black market, open and free exchange is central, resulting in a Kunst der Begegnung, an art of encounter.

WAS BEUYS A FEMINIST? 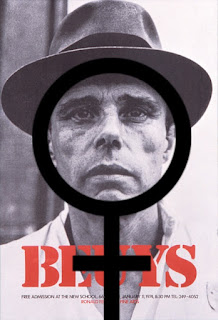 My last blog entry dealt with an unexpected question that was asked during the Artist Rooms session on Beuys at Tate Modern on 18 September. Here is another one: was Beuys a feminist?

My own answer was brief and purely factual: his Office for Direct Democracy through Referendum went in for equal rights for men and women. A blackboard that was used at Documenta V in 1972, where Beuys’s contribution consisted of the presence of the Office throughout the entire 100 days the exhibition lasted, said:

“Our suggestion: Equal Rights for men and women! 20 years of party politics have not managed to realise this basic right: the recognition of domestic work as labor (career); to legally place this career on an equal level with others and to legitimate it through salary. Homemakers [sic] salaries! Women and men! If you would like to support our work toward the citizens’ demand to secure a true equal rights [sic] for women, then please sign this list. True freedom for women”.

At face value, unconditional basic income does nothing to secure equal rights for women. It only makes it easier for women (and for men to force women) to stay at home and do the chores. I will return to the question of true equal rights and true freedom further down.

First, I want to paraphrase what another participant, the collector Anthony D’Offay, had to say about the matter. D'Offay, a former art dealer who knew Beuys personally, pointed out that the latter distinguished between a male and a female “principle”, that he counted intuition among the characteristics of the female principle and that he had great respect for women’s intuition.

In terms of sex and gender, such views no longer hold up. To take but one obvious reference, Judith Butler has argued convincingly that being female is not the same as being a woman. Gender roles are established and perpetuated performatively. From this perspective, any female principle set within a bipolar system is suspect.  Respect for women’s intuition is all fine and well, but within a bipolar system built up around a male and a female principle it will only serve to perpetuate conventional gender roles.

Several arguments could be made against this. One of them is historical: the first wave of feminist artists, roughly contemporary with Beuys’s formative period during the 1960s and early 1970s, was concerned with visibility. In order to achieve equality between the sexes, it was felt that traditionally “female” activities, materials and tasks ought to be made visible and to be recognised as equally important as “male” ones. In this respect, Beuys is first and foremost a product of his time.

More importantly, however, Beuys’s ideas about the circulation of energy extended to the field of economics. If he mentions labour, salary and domestic work in one sentence, it is because his Energy Plan distinguishes between “production capital” and “consumption capital”. Every citizen, he said, ought to receive consumption capital in order to satisfy his/her needs. After a particular need had been satisfied, the money, having lost its value, would be returned to a central bank and be issued again as consumption capital. Everybody has needs, so everybody deserves his/her portion of consumption capital, no matter what they do. Payment for domestic labour follows logically from this scheme.

So was Beuys a feminist? I would say not. He wasn’t one in the modern sense of the word because he thought in terms of bipolar opposites and he wasn’t one in his own time because he thought in terms of flows. He isn’t one now because he is not radical enough and he wasn’t one back then because he was too radical. So please don’t get me wrong: if I say that he wasn’t a feminist I don’t mean to say that he was a male chauvinist, heterosexist pig. I mean to say that a concept like “feminism” would have been secondary in his scheme of things. Whether he was right to give it that position is another question.
Indsendt af Peter van der Meijden kl. 07.30 Ingen kommentarer:

During the Artist Rooms session on Beuys at Tate Modern on 18 September (see my previous blog post) one of the participants asked about the importance of Beuys in the digital age. Frankly, the question had me flummoxed. I had noticed that we were constantly linking Beuys to earlier artists and was thinking about his role today, but the word “digital” threw me.

The first thought that struck me was that the ontology of his work is completely different from that of a digital(ised) work. A digital work exists in as many copies as there are people who are viewing it at the same time and it is constantly renewed onscreen. Beuys, on the other hand, made unique works, often using unique objects. While it is true that he also created over 500 multiples – something which we also discussed –  these often draw upon the material properties of the objects and materials used, so even his non-unique works depend for their functioning upon the handling of one particular copy. When you put his work online, you lose a whole range of meanings.

In response to the question about the digital age, one of the organisers suggested that Beuys, with his love of discussions and his didacticism, would certainly have embraced the social media and the internet as a worldwide communicative platform. Given the broad range of media he worked in and his willingness to try his hand at new media such as performance and installation art, I have no doubt that he is right. However, it is speculative as well: “What would Beuys have done if he had been alive today?” The question about his relevance in the digital age certainly implies a question about the present, but I don’t think it means having to imagine the artist’s live presence in the present. As I understand it, it is about his work as we have it today and the way in which it employs media.

My own answer was a quote by Beuys from a Public Dialogue at the New School in New York on 11 January 1974. Beuys was there to explain his Theory of Sculpture – the idea of social sculpture – and the very first question was: “Have you ever thought of using holography as a medium?”. This got a laugh from the audience, but Beuys was unfazed.  After having asked some additional questions, he said: “This science [holography] could have similar interests to my interests, to look for the whole, if you say ‘holo’ from the Greek ‘holos’, meaning the whole”. Did he counter humour with humour? Possibly – but the way kept referring to holography throughout the rest of the dialogue has a bearing on the question about the digital as well.

Back to the New School. After the initial discussion of holography petered out, people in the audience started complaining about the lack of seats and the noise. People were queuing up outside, but because of fire regulations it was not allowed to sit in the aisles, and people talking in the back rows prevented others from hearing what was being said. Addressing one of the disgruntled visitors, Beuys said: “But first you have to ask yourself whether your intervention is productive for the whole. What you did just now [complaining that a discussion could not be truly public if there weren’t enough seats] was a kind of critique, yes. And I’m saying, is critique the only method to find a solution for the questions we all have in the society?”.  Beuys clearly does not think that critique alone is enough to create solutions. What it takes is people taking responsibility for the holos, the whole; people making contributions that are “productive” for the whole.

After a lot more heckling and wrangling, holography came up a third time, now in connection with Beuys’ aesthetics. Asked how he would describe his new aesthetic, Beuys answered: “I describe it radically: I say aesthetics = human being. That is a radical formula. I set the idea of aesthetics directly in the context of human existence, and then I have the whole problem in the hand, then I have not a special problem, I have a ‘holography’”. To Beuys, holography was more than a medium but less than simply everything. It was more than just a way of writing things and less than everything that can be written. It was “human existence and all the problems it entails”, more specifically human existence as a matter of aesthetics, of sensory and emotional values.

This relates directly to Beuys’s doubts about criticism as a useful way of finding solutions. His arguments throughout the Dialogue suggest that he prefers responsibility to critique, productivity to reactivity, the sensual and emotional to the analytical. In focus is not a particular understanding, but a way of being in the world. Being in the world certainly means something different in the digital era, but I doubt whether the digital as a medium would have any impact on the way Beuys wanted his work to be understood. Holography was brought up as a specific medium, but Beuys turned it into one aspect of human existence. Extrapolating from there, the digital, which is also a means, becomes something we all know from experience, something to take responsibility for, part of a “problem” – a more positive way of saying it would be “condition” – that we are a part of and that we can solve – change – by taking responsibility.