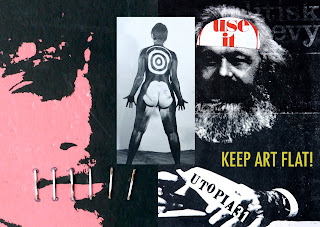 Keep Art Flat! opened last Thursday. A flurry of activity, and there it was: nearly 250 works by 95 artists, presented for your enjoyment at Kunsthal Charlottenborg in Copenhagen until 6 November 2016. For every visitor there is a free catalogue with articles by John Held, Vittore Baroni, Chuck Welch and myself. And because we know that the audience won't be satisfied even with that, there is Talk Art Flat! on 28 September. Two hours of discussion about Mail Art and politics, from 17 until 19 at Kunsthal Charlottenborg. Don't miss it!
Indsendt af Peter van der Meijden kl. 13.03 Ingen kommentarer:

SANDIE, HER ARMPIT AND ME

It is often said about the art of Thomas Hirschhorn that it engages people because it is based on fan culture. Hirschhorn’s monuments and other installations, the argument goes, do not speak to the visitor in the “professional” language of art, but in the more informal language of genuine personal excitement. Ray Johnson, so often credited with the “invention” of Mail Art, also had a thing about fan culture. The Shelley Duvall Fan Club is perhaps the best known of his fan clubs, but he also initiated a Paloma Picasso Fan Club, a Jean Dubuffet Fan Club, a Marcel Duchamp Fan Club, and a Blue Eyes Fan Club, the latter with a Japanese section called the Brue Eyes Fan Crub. Is there some sort of point here? A link between 1960s/70s Mail Art and 1990s “relational” art?

There is certainly a link between Mail Art and ‘zine culture. Mail Art and home-produced fanzines use the same means to a similar effect, and the ‘zine and tape circuit regularly made use of the same infrastructure as Mail Art did. There may also be a link at the level of con- or intent: Johnson often employed the symbol of a potato masher, identifying himself as a “masher”, someone who comes too close – a stalker, in today’s vocabulary.

But it is important also to note that Mail Art had no style of its own. The visual similarity with fanzines is likely to be due at least in part to the fact that they use the same means (photocopy, offset) and are produced at home by a single person. Moreover, the similarity between the fanzine “feel” and the “feel” of a Johnson work cannot support a claim about Mail Art as a whole. Johnson’s work has always had a tendency to come too close. Much Mail Art produced by others comes close because it arrives at someone’s private home, but it rarely comes too close.

Look at Cees Francke. His work on the theme of Sandie Shaw seems upon first glance closely related to Johnson’s Fan Clubs. The difference, however, is that Francke’s work comes too close to the person of the artist as well. There is fan culture in his Sandie Shaw-worship, but there is obsessiveness of a different type as well. It’s not just Sandie Shaw who’s in focus, it’s armpits as well. Sweaty armpits. Immaculate armpits. Sandie’s Third Armpit.

Neither Johnson’s “club” atmosphere nor Hirschhorn’s homemade look suffice to explain Francke’s project. Not even the two combined are enough to capture its full breadth. Mail Art is about “us” and about Doing It Yourself, but it is also about the “me” of the sender and the receiver and all the ways in which the work manages to capture the one and engage the other. One of Francke’s stamps reads “Sandie Shaw Internal Apparitions”. Mail Art is about being “inside” and about doing a lot with minimal means, but in Francke’s case, “internal” also refers to the sender’s and the receiver’s innermost feelings and “apparition” to the images they give rise to.