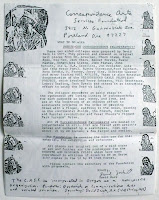 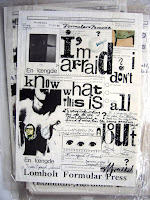 In which type of art do you look for a key to a work in the works of others? That’s right, in Mail Art. Mail Art, like no other art form, is designed to invite other artists to respond, and the responses tend to be superb guides to the potential of the work that provokes them.

In 1978, British Mail Artist Pauline Smith wrote, in one of her beautiful Letraset compositions, “I’m afraid I don’t know what this is all about” on a work called A Length by Niels Lomholt, or Lomholt Formular Press, as he used to call himself. German artist albrecht d. added: “I can’t speak Danish” and “It’s a surprise for me to read that Pauline Smith has the same problem”. Surely it could not have come as a surprise to him that Smith did not speak Danish?

Lomholt Formular Press published formulae, documents that have all the trappings of the bureaucratic form but function in the exact opposite way. Rather than making information comparable and quantifiable, they are tailored to generate an ever-expanding cloud of responses that radiate from the formula outwards. There are all the usual boxes and dotted lines, but instead of easily answerable questions they are headed by phrases such as “Are you satisfied with not being able to move any part of your body but your feet?”, “The duration of the action … measurement as experienced” and “Describe the point between run and walk”. Surely language is not the only problem, or even the biggest one.

American Mail Artist Irene Dogmatic wrote, “To tell you the truth, I have trouble participating in your projects quite often, (1) because they seem extremely self-contained to begin with (i.e. the idea seems inherent in the forms you send, almost as if they can stand without additions by anyone) and (2) quite often your ideas are over my head”. And Davi Det Hompson, also from the US: “It’s difficult for me to find a place to enter into your formula. Yes, there are plenty of empty boxes and dotted lines, yet, you seem to have already filled the important ones”. These artists have difficulty filling out the forms because to them, they already seem to contain everything that is necessary. The boxes and dotted lines make it clear that a response is asked for, but the general setup – and, to venture a guess, the images and words added by Lomholt himself – indicates that all the necessary ingredients are not there.

Smith’s and albrecht d.’s response does something else. It is critical, but it engages with the work as well. Smith sculpts her words around the words and images that are already present on the page, drawing attention to the form as a visual composition. Albrecht d. responds to the bureaucratic overtones, adding comments such as “Formular paranoia” and “Lomholt shows the crazy world today”. Both respond in the spirit of their own work. Smith’s Mail Art works are immediately recognisable by the beautifully balanced Letraset and collage compositions, and albrecht d.’s work, both in visual art and in Mail Art, thematises the violence and paranoia of everyday reality. Both artists responded on the basis of their own practice.

On the template of A Length, Lomholt wrote a numbered list of what a formula is to him: a process, a practical example of the irrational development of an action or an idea, a way of asking questions, a world that has not materialised yet, a series of material layers, a chance of watching the private as it develops itself, a starting point for change, a mirror, a list of other things and a poem. One thing is to hear him say it, another is to see his contacts enact it. To watch artists such as Smith and albrecht d. as they try to come to grips with the form, as they develop the work in the process, as they respond to the questions posed explicitly and implicitly, as they help to materialise the work, as they mirror themselves in the form and are mirrored by it – as they interact with it as a work of art in their own artwork.

Self-contained? Over your head? Impossible to penetrate? All you have to do is look at the way others have come to grips with it.

WAIT AND SEE / WATCH WHILE YOU WAIT

On 17 February 1979, Mail artists Niels Lomholt, David Zack and Horacio Zabala met in Falling, Denmark. It was uncommon for Mail artists to meet. One of the hallmarks of Mail Art is that it made it possible to work together with people you had never met and were unlikely to meet. When Swiss Mail artist Hans-Rudi Fricker in 1986 tried to institutionalise Mail Art meetings by proposing “Tourism” as the next step after “Mailism”, his collaborator Günther Ruch designed a stamp saying “Tourism in Mail Art Remains Tourism and Not Mail Art”. But the meeting in Falling was a meeting of friends. Lomholt, Zack and Zabala set special store by their postal exchanges.

From 15 September, works by all three artists will be on display at Charlottenborg in Copenhagen as part of the exhibition Keep Art Flat: Mail Art and the Political Seventies. If anything, the event will show how different they were. Lomholt operated under the name of Lomholt Formular Press. His formulae use the trappings of the bureaucratic form – dotted lines, boxes, figures – to invite his correspondents to think differently about the world surrounding them. Zack is best known as the author of the first “manifesto” of Mail Art to appear in a mainstream art magazine, "An Authentik and Historikal Discourse on the Phenomenon of Mail Art" in the January/February 1973 issue of Art in America. Less a manifesto than a rambling account of his own personal experience of mailing art, it is typical of his contribution to the network: long texts full of verbal acrobatics and obscure references to people he knew and situations he had experienced. Zabala emigrated from his native Argentina to Europe in 1976. At the time, Argentina was in the grip of the "Dirty War", waged by the military regime against political dissidents, so it is not entirely surprising that the project that was to keep him occupied until 1981 was called Today, Art is a Prison.

The strength of Mail Art was that it could accommodate people who worked with the bureaucratic form, the hallucinogenic narrative and the “socio-imaginary test” (as Zabala called his project); that it could bring together people from Europe, the US and South America; that it did not require them to agree upon anything. The 1970s may have been dominated by the Cold War, but Mail Art was not about taking sides. It made it possible to express one’s views, certainly - but it did not force people to subscribe to a specific agenda. There are no absolute judgements in Mail Art. It is not about what you do, but how you do it. Criteria are generated on the inside, not imposed from the outside.

Fluxus artist Dick Higgins had a stamp that read “No Anticipation Allowed”. Stamped on an envelope, it translates as “wait and see”. My programme for the coming month is “Anticipation Required”: watch while you wait. I have always been fascinated by Mail Art's inclusiveness and diversity and drawn towards its typewriter-and-newspaper-cutout aesthetics. I have been writing about it since 2008 and have spent the past many months together with Mail artist Niels Lomholt and art historian Lene Aagaard Denhart, preparing Keep Art Flat. In this blog, I will now roll out the red carpet for the exhibition, presenting the reader with related works and thoughts, an artist or a work per entry. In anticipation.
Indsendt af Peter van der Meijden kl. 04.44 Ingen kommentarer: