THE MUSEUM IS CLOSED 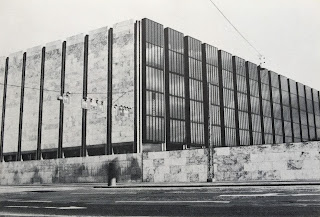 On 9 December 2015, Nikolaj Kunsthal in Copenhagen opened an exhibition about Knud Pedersen. The exhibition, curated by Johanne Løgstrup, is not exactly your standard gallery show: it only exists of videotaped interviews with people who knew Pedersen and a list of projects on one wall that visitors can refer to while listening to them. I participated by giving an interview and collecting the material for the list. After all, I've known him since 2000 or 2001 and written about him in my Ph.D. and various other publications.

For the invitation, Nikolaj Kunsthal chose an image of Pedersen’s Copenhagen Museum of Modern Art. That is to say, the photograph does not actually show the museum, but the Danish National Bank, designed by Arne Jacobsen and built between 1965 and 1978. When the Copenhagen Museum of Modern Art opened in 1967, it found shelter in a small space in the basement of Nikolaj Church, where Pedersen had his Art Library, but later it became a conceptual museum. No building, no staff, no nothing – according to Pedersen the ideal venue for conceptual art. And since the museum had no actual physical existence, Pedersen thought, it might as well be the National Bank.

But it would be wrong to say that the Museum had no existence whatsoever. Not only did the Museum sponsor many art events, it also existed as a patent. Pedersen took out a patent on the name and used it – more or less successfully – to file lawsuits against other museums who tried to adopt names that resembled that of the Museum. That the new museum in the suburb of Ishøj that the Municipality of Copenhagen opened in 1994 is called Arken, and not the Copenhagen Museum of Modern Art, for example, is due to Pedersen.  If it did not have a physical existence, the Museum at least had a legal one, and that is almost as solid in Western society as we know it.

“The Museum is Closed” is the title of the exhibition at Nikolaj Kunsthal. The museum is closed, but the exhibition is open. The Copenhagen Museum of Modern Art only exists as a concept, but it can act in the world thanks to its legal status nevertheless. Is it accidental that Pedersen chose the National Bank as the place to incarnate his Museum? After all, money has the same un/real character, not really there but available for use nevertheless. Maybe there is more to Pedersen’s choice than just a “why not…?”