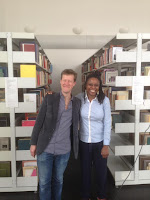 Last Saturday I found myself counting seconds during a performance afternoon at Overgaden in Copenhagen. For nearly three hours. Here is why.

Sometime last year I volunteered to be part of Co-Lab 2, a project curated by Portuguese artist Marcio Carvalho. The idea is to create one month long collaborations between non-Western artists and representatives of the Western institutional world.I participated as a representative of Copenhagen University and got to collaborate with Kenyan artist Atò Malinda throughout the month of April. The event at Overgaden was the final presentation of our efforts.

When we first met, we had nothing. All we knew was that she is interested in the way African artefacts are treated by Western museums and that I teach gallery studies. The most obvious way forward seemed to be to visit a museum. We chose the National Museum of Denmark, which has the largest public collection of African artefacts in Copenhagen. Although our backgrounds are completely different, at least we could meet around the same object.

We ended up spending several days at the museum, having long discussions about the objects on display and the way they are made to represent African culture(s). The question of culture (singular) and cultures (plural) is important, because one of the first things that struck us is that in most displays, the objects were used to represent the entire continent, or at least large swathes of it. Another thing we kept returning to was that the African displays are predominantly brown – the brown of pottery, baskets and wood, wood, wood. Nothing stands out. And then there was the importance of text: the way objects appeared empty whenever there was no text, the way words immediately started to seep into the object whenever there was text.

So we ended up talking about representations; Atò about the objects and the people they are made to represent and myself about the displays and the way they address the visitor. To the casual listener it may have sounded as if she was the wronged party and I was the insensitive apologist of the system that maintains the wrongs, but it did not feel like that. We were both bitter and we both had fun - so much fun, in fact, that we decided to treat the discussions themselves as our joint performance.

We arrived at two answers that more or less respond to our respective positions. Atò conducted a painting workshop during which the visitors were invited to paint empty boxes brown – the exact shade of brown that they already had been painted with once. She would squeeze the paint onto the brush herself, without leaving the visitor a choice, and afterwards she would place the boxes on a table as if she was installing a museum display.

I myself, meanwhile, had recorded all that we had discussed during our last visit and had worked out how many seconds we both had spoken. The numbers were read out in real time, stopwatch in hand: “Atò 4 seconds… Peter 5 seconds… Ató three seconds”, et cetera. All that was objective about the conversation was represented, all that was subjective – the actual content – was edited out. The result was a long, slow pattern in time that functioned in the exact opposite way from the original discussion. Short exchanges became interesting, longer arguments dull. And while the discussion had served to make us understand the other better, we appeared as opposites during the presentation: Atò hospitable and service-minded, me self-absorbed and unapproachable.

But there were links, too. Next to me, I showed a picture of the room that the particular part of our discussion that I was presenting had been about, accompanied by as many “facts” as I had been able to collect. Atò referred to the discussion we had in that particular room in the way she addressed the visitors and the way she displayed the painted boxes. Despite our different ways of presenting ourselves, we were still speaking of the same thing – not the object as such, but the discussion, understood as an immaterial object.

Afterwards, we – not only Atò and me, but also the other participants, Nigerian artist Odun Orimolade, Cameroonian artist Christian Etongo and their respective collaborators, Mette Garfield and Jessie Kleemann –spoke about the effect of such collaborations with the audience. What do they achieve? Maybe our presentation had been blank and uncommunicative, but our explanation seemed to strike a chord. The brown boxes and the empty seconds, the empty offer of participation and the uncommunicative patterning of time – they resulted in a good deal of discussion.

Someone asked why we had not made our discussions public. We could have – but then we would only have been discussing representations, not representing a discussion. We would have been turning what presented itself to the eye into words, but we would have lost the experience of doing so. A result is all fine and well, but what it is it without the experience of arriving at it?